The stuffing of the duvet is mainly down, and the down is the abdomen of the goose and the duck, and the fluff of the flower of the aloe is called a feather. Because down is an animal protein fiber, it has higher heat preservation than cotton (vegetable cellulose), and the downhole spherical fiber is densely covered with thousands of triangular fine pores, which can shrink and expand with temperature change, and produce temperature regulation function. It absorbs the hot air flowing from the human body and isolates the intrusion of cold air from the outside. 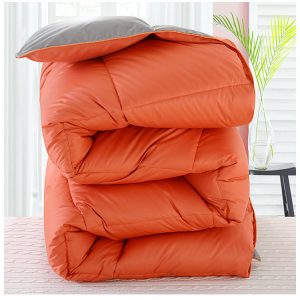 1. The duvet has high warmth, strong elasticity, high bulkiness and lightness. soft. Soft features. Tested with a down ratio of 50%, the lightness and bulkiness is equivalent to 2.8 times that of cotton and 2.2 times that of wool. The same size of natural duvet quilt, the duvet is the lightest weight, about 1/3 of the quilt, 1/2 of the wool quilt, so the duvet is not only gentle and warm, but also feels good.
2. The duvet is breathable and dry, has strong moisture wicking, is not squashed, and has good moisture-absorbing and diverging properties that other warm materials do not have. It is called “the quilt that can breathe.” In the quilt family, down is the most expensive, the warmth of the duvet is undoubted, because the feather itself is a triangular skeleton structure, so the air storage is relatively large, the temperature is good, can maintain the human body in the quilt The temperature is not easily affected by the indoor temperature. This means that the duvet can be used in the general room. It is not necessary to use the temperature at low temperature. It can be used in spring, autumn and winter.
3. The duvet is durable and has a certain effect on beauty. The duvet is not knotted, deformed, and very durable. Usually a duvet can be used for more than 30 years. In normal use, as long as you pay attention not to be scratched by sharp objects, do not directly expose the sun, and keep it in a ventilated place to maintain the down performance. Moreover, it can make the central nervous system stable, and soon enters a sweet dream, so it also has a certain effect in beauty. “The natural duvet is exported to the beauty” is also the reason.
4. The duvet is suitable for patients with hypertension and prevents rheumatism and arthritis. Hypertensive patients can not cover too heavy quilts while sleeping, otherwise it will affect blood pressure. The duvet is the softest of all bedding materials, and the patient uses no pressure.
Due to the cold and dampness, people are susceptible to rheumatism and arthritis. In addition to superior warmth performance, the duvet can also be ventilated and conditioned, so that the water discharged from the body can be released to make the body dry, and it is not suitable for rheumatism and arthritis.

1. Gentle and warm: There is no natural warmth in the world that exceeds the warmth of down. Plus the down and full of elasticity, so the duvet is not only gentle and warm, but also feels good!
2. Moisture absorption and divergence: The duvet is breathable and dry, and has good performance of moisture absorption and divergence that other thermal insulation materials do not have. It is called “the quilt that can breathe.” The central nervous system is stable and quickly enters a sweet dreamland, so it also has a certain effect on beauty. “The duvet is beautiful under the beauty” is precisely because of this truth.
3. When the human body is in a sleep state, about 170 cc of water is discharged every night. Generally, it will accumulate too much water after being used for a short time. It is easy to form a hotbed for the growth of pathogens. It causes discomfort to the skin or trachea. It has thousands of breathable triangular pores and the surface layer contains waterproof grease, which can automatically shrink or expand with changes in outside temperature and humidity. It can quickly absorb the sweat and moisture of the human body and quickly disperse, keep the quilt clean and dry, and use it for a long time. It also prevents the development of rheumatism.